New York, July 9, 2009 – Mitchell-Innes & Nash announces its second solo show of paintings by Enoc Perez. These new works further explore Perez's interest in the relationship between form and desire. The exhibition will include several paintings of modern and contemporary architectural landmarks. From a famous Norman Foster building in London to a small bank in Georgia by an unidentified architect, Perez has sought out images that speak to an idealized public life. For Perez, the buildings he paints represent an optimism tinged with the sadness of an impossible utopia. His architectural subjects often seem both futuristic and nostalgic – always looking forward to a perfect future that will never come. The largest painting in the show will be the monumental canvas "Palace of Justice," a Niemeyer building in Brazil. Perez continues to work with a unique painting method: each layer of paint is applied via an intermediary layer of paper, in a process that relates to mechanical printing. But as his mark-making has become more expressionistic and his surfaces more thickly worked, he tests the limits of his self-imposed constraints. Enoc Perez was born in San Juan, Puerto Rico in 1967 and currently lives and works in New York. He received his M.F.A. from Hunter College and B.F.A. from Pratt, both in New York. In 2007 he was the focus of a major survey exhibition at MoCA at Goldman Warehouse, Miami. He has exhibited in museums and galleries in the Americas and Europe, including the Centre Pompidou, Paris; The Collezione Maramotti, Reggio Emilia, Italy; the UCLA Hammer Museum, Los Angeles; The Aldrich Contemporary Art Museum, Connecticut; and El Museo del Barrio, New York. He is represented in New York by Mitchell-Innes & Nash. Listing Information: Mitchell-Innes & Nash: 534 West 26th Street T: (212) 744-7400 www.miandn.com Opening reception: Thursday, September 10, 2009 Gallery Hours: Tues-Sat, 10am – 6pm Press Contact: Mamie Tinkler T: 212 744 7400 E: mamie@miandn.com 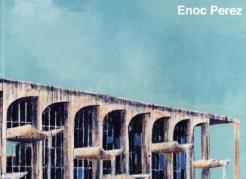