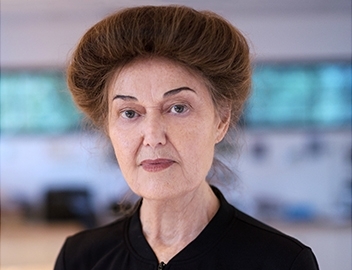 Mary Kelly, artist and Judge Widney Professor in the Roski School of Art and Design, University of Southern California, in conversation with Shelley Langdale, curator and head of modern prints and drawings, National Gallery of Art

Mary Kelly is a conceptual artist and writer who lives and works in Los Angeles. For four decades she has explored ideas concerning identity, sexuality, history, and memory through large-scale narrative installations. Kelly has been a central figure in discussions of feminism in art, and her practice incorporates the personal residue and material processes of daily life that inform her political reflections.

Kelly, who was engaged in feminist theory and the women’s movement, began her critique of conceptualism after moving to London in 1968, at the height of the student movements and civil unrest throughout Europe. Her ground-breaking series Post-Partum Document (1973-1979), which explores the intimate relationship between a mother and her child, caused a media frenzy when it opened at London’s Institute of Contemporary Arts in 1976.

In the 1990s, Kelly turned to issues surrounding war, which led to her investigation of the nature of collective memory. During this time, she developed the innovative medium of compressed lint with embedded text that she used to create My James (2008), which the National Gallery of Art acquired in 2018. This outsized postcard (measuring nearly seven feet wide) is from a suite of three, each addressed to one of the American civils rights workers—James Earl Chaney, Andrew Goodman, and Michael Schwerner—whom the Ku Klux Klan murdered in Mississippi during the Freedom Summer of 1964. On June 15, 2020, during the Gallery’s annual Elson Lecture, Kelly presented an overview of her career and discussed her artistic practice with Shelley Langdale.

This presentation was recorded early in the pandemic, which impacted the audio quality.