b. 1979, Nova Scotia, Canada
Lives and works between Vancouver and Berlin

Brent Wadden’s woven paintings seek to entangle the traditional divisions between folk art and fine art. Composed of woven fibers, sewn and mounted on canvas, the artist’s abstract works complicate the painterly notion of surface, while reconsidering the concept of the handmade. Wadden typically uses second-hand fibers including wool, cotton, and acrylic to create his visually jagged, yet simultaneously mutable geometric constructions. Conscious of the density and tension of his materials and practice, Wadden’s focus on form seeks to physically meld the aesthetic gender and status roles associated with craft and abstraction. The resulting paintings reference both a structural life and planar presence, which further seek to rework notions of space and mark-making. 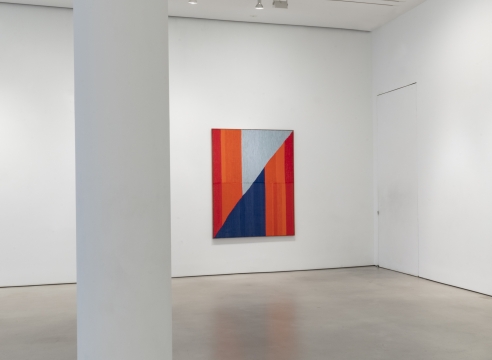 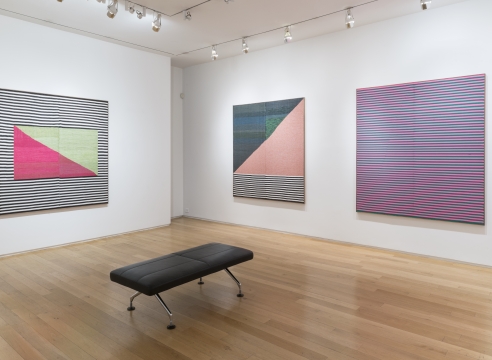 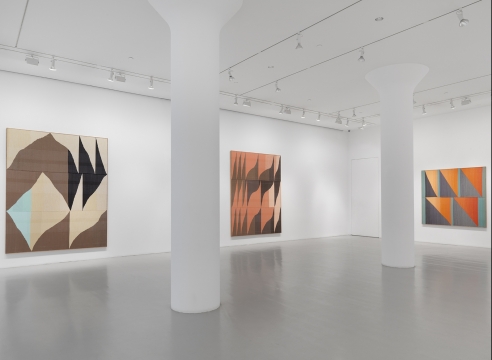 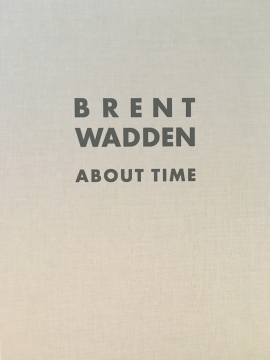 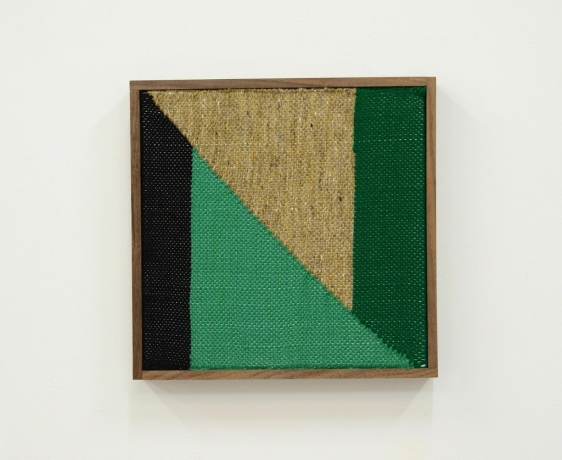 Bid on Eddie Martinez and Brent Wadden in the Free Arts NYC: Benefit Auction 2018. Free Arts NYC is an arts and mentoring nonprofit dedicated to providing New York City youth with access to the arts and creative careers. 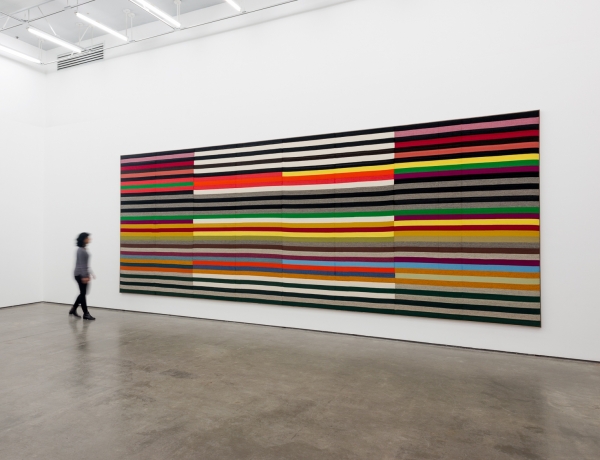 Two Scores is a solo exhibition of ambitious new work by Vancouver-based artist Brent Wadden, his first in a public institution. Presented across both spaces, Two Scores is dominated by singular woven statements upon the floor and walls. In their dramatic scale and graphic simplicity, they mark a point of departure for the artist, but might also be said to reveal both an unseen structure and a complex set of tensions that quietly anchor Wadden’s ongoing practice as a whole. 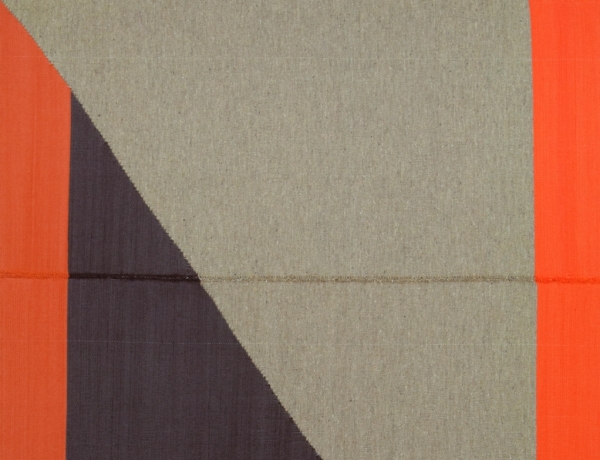 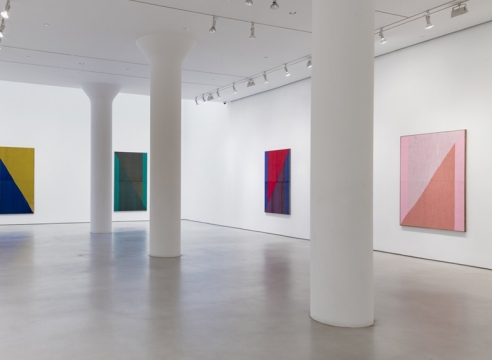 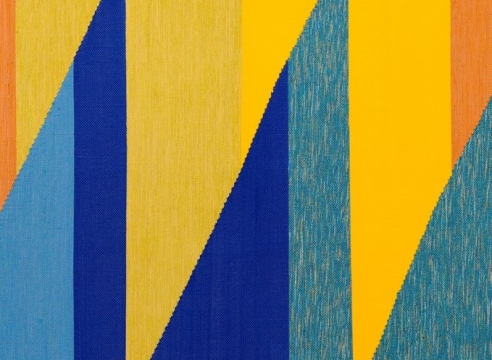 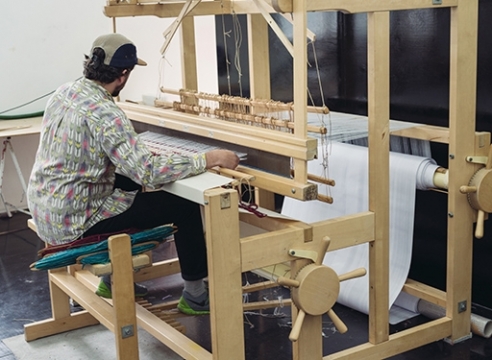 “There is no going back into a weaving unless you unravel the whole thing,” says Brent Wadden. “So I usually just keep all the mistakes, as it’s a total pain in the ass to remove them.” With a resume of solo art exhibitions in galleries spanning from Paris, London, and Berlin to South Korea and New York, the charm of humility hasn’t been lost on the autodidactic weaver. This self-taught naïvety may just be the warp and woof of Wadden’s work. 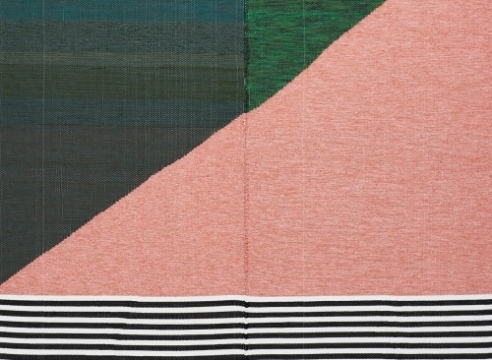 Handwoven panels of high-contrast stripes—pink and green, black and white—sewn together and mounted on canvas by the Berlin-based Canadian, split the difference between Op art and craft. In one small example, exposed seams and irregularities in the fabric create the same kind of visual stutters that another artist might achieve by painting sharp edges. Elsewhere, muted colors and diagonal lines suggest a range of allusions, from heraldry to upholstery. Wadden’s works also enlist the textures of the found and secondhand yarn that he uses: one rosy triangle, set against mixed knurls of oceanic blue and green, simultaneously brings to mind an endless beach, a scratchy couch, and the standard of a medieval army.

Stand inches away from a Brent Wadden canvas and the work takes on a similar monumentality to a Clyfford Still painting. The edge of a given shape seems to drop into a bottomless void. A few steps back, however, with the canvas in full view, these shapes form a pattern—those canyons are now part of a flat surface without depth. From this distance the eye skates from swatch to swatch, absorbing the variation in surface color and texture. All of the eight works on view oscillate, at times assuming the flat surface of a geometric design, at others, the depth of a landscape.

Download PDF The Brooklyn Rail
By Daniel McDermon / Roberta Smith
What to Do This Weekend
The New York Times May 28, 2015

See the excellent first show by Brent Wadden, a young Canadian-born painter who has set aside his brushes and taken up weaving, making thick rug-like abstractions whose jagged, interlocking shapes have the wobble of Op Art except softened by vagaries of color, texture and edge. The work resonates with the history of textiles and meets halfway the efforts of textile artists like Anni Albers and Sheila Hicks, who broached painting from the other side.

Working on a back-strap loom, this young Canadian artist intertwines acrylic yarns with hand-spun wools that he then stitches together and finally mounts on raw canvas. The large-scale works that result are more than simply intriguing: They take to task all kinds of preconceptions about painting.

Wadden is another artist who has been making the rounds in Europe for several years, but is little known on this side of the Atlantic. That will change in 2015 when Mitchell-Innes & Nash gives him a solo show in their Chelsea space. His practice lies at the intersection of the fine and applied arts. Working with a back-strap loom, Wadden intertwines acrylic yarns with wool and then stitches the material together before mounting it on raw canvas. The finished works, which he considers to be paintings, refer to high art, low art, the domestic arts, Pollock, Klee and indigenous traditions of art making. They are mesmerizing, not only due to their final visual state, but because of the viewer is made to "feel" the labor deployed in their making. In their facture, they are also an extraordinary subversion, a softening, of the maleness usually ascribed to geometric and hard-edged abstraction.

Where most young artists who see sudden success have a tendency to stick to what got them attention in the first place (if not downgrade due to productivity pressure), Wadden has taken bounds forward with each of his most-prominent showings: First at Berlin's Peres Projects and now at Almine Rech. Wadden's central themes endure in these latest additions to his Alignment series: an interest in indigenous art-making in his home province of Nova Scotia, a heavy dose of punk culture, and a drop of the psychedelic. But what started as many meter-lengths of knitted, black and white triangles and rhombuses, and were subsequently stitched together and placed on stretcher bars have, in Rechs' Brussels space, morphed into around 20 weavings in his favored neutral tones as well as salmons, deep and robin's egg blues, yellow, and kelly green.

Canadian-born artist, Brent Wadden has been based in Berlin since 2005. His geometric abstractions and hand-woven fabric pieces colourfully blur the lines between traditional folk art and contemporary fine art, through his use and exploration of aboriginal, native or cultural totems.

Until three years ago, the Canadian-born, Berlin-based artist Brent Wadden had never touched a weaving loom. He was mostly making paintings and drawings, but because so many of them featured complex repeating geometric patterns, he was constantly told by friends and observers that they’d make amazing textiles. Most fine artists would have shrugged off a suggestion like that, preferring to hew closer to their own oeuvre, but not Wadden — he asked a friend for lessons on a laser-cut loom, and then stuck with it until he was making full-scale tapestries on his own and showing them alongside his other work. The pieces pictured here are part of his new Alignment series, on view starting this Friday at Peres Projects in Berlin.

Brent Wadden is a Canadian artist who has been based in Berlin since 2005. His paintings and weavings range from colourful displays of symmetry to subtle monochrome motifs of repeating shapes. By applying tools and techniques from handicraft traditions to contemporary designs, he blurs the line between the traditional categories of fine and folk art. Lisa Wilson is a folklorist and self- taught painter currently working as a graveyard conservator in the ghost town of Port Royal, in Newfoundland.

Dazed & Confused's former guest art editor, Javier Peres, has choosen a trip of upcoming artists to be profiled on Dazed Digital.  The first one comes in the shape of Canada-born Bretn Wadden.  In keeping with Peres' no-guts-no-glory attitude, he describes Wadden as "expanding the world of abstract geometric painting into the realm of humility and human-ness".

Brent Wadden’s paintings demand a second look. And a third. And a forth. And a fifth. Their multitude of geometric abstractions reveal new patters, divisions, and indeed characters with each look. With two canvases currently on view in Peres Projects’ summer group show and a third stashed in new dealer, Javier Peres’ office, Wadden, who splits his time between Berlin and Canada, has shown an entirely new depth, not only within the paint itself but in relationship to the viewer.