NEW YORK, September 20, 2016 - Mitchell-Innes & Nash is pleased to present two simultaneous exhibitions of sculptures and works on paper by the late British artist Sir Anthony Caro (1924 – 2013), staged across the gallery’s Chelsea and Madison Avenue locations. On view starting December 8, 2016, this is the artist’s first exhibition in the US since his death in 2013 and his sixth with Mitchell-Innes & Nash, who has exclusively represented Caro in New York for 14 years.

The exhibition features work spanning Caro’s sixty-year career and highlights the artist’s fearless and constant innovation throughout his lifetime. In Chelsea, six large-scale steel and Plexiglas sculptures from 2011 through 2013 will be juxtaposed against four colored paintings on paper from the 1950s, on view for the first time in the US. In the Madison Avenue gallery, four steel, bronze, and brass sculptures will be on view alongside a selection of gestural black-and-white ink works on paper from the 1950s. The exhibition will be accompanied by a fully illustrated catalogue with a new essay by Julius Bryant, curator of Caro: Close Up at the Yale Center for British Art (2012) and Celebration of the Life and Achievements of Sir Anthony Caro at the Tate Britain (2014).

In an interview with the New York Times in 2007, Caro said, “I’m not interested in doing old things. I’m always trying to push it and see what happens.”  True to these words, Caro constantly pushed himself to experiment with different sculptural materials until his death in 2013.

Widely recognized as one of the most significant sculptors of the 20th century, Caro first rose to prominence in the 1960s with imposing painted steel sculptures freed from the pedestal, exhibited directly on the floor.  In a tribute to the artist, Sir Nicholas Serota, former director of the Tate, writes, “In the sixties [Caro] established a new language for sculpture in a series of elegant, arresting, abstract steel sculptures placed directly on the ground. His development of this vocabulary, building on the legacy of Picasso, but introducing brilliant color and a refined use of shape and line, was enormously influential in Europe and America.”

Throughout the 80s and 90s, Caro continued to introduce new materials into his work including silver, iron, bronze, brass, ceramic, terracotta, and wood. In 2010 at the age of 87, Caro introduced yet another new material: Plexiglas. Frustrated by the fragility of glass, Caro turned to Plexiglas as a means to incorporate color and transparency in his sculptures. In Terminus (2013), part of the exhibition at Mitchell-Innes & Nash, a bright red piece of frosted Plexiglas bisects a steel and wood composition. The artificially colored red Plexiglas highlights the natural red of the rusted steel. Autumn Rhapsody (2011/12), in which Caro uses a striking yellow Plexiglas to cover and complement the painted yellow steel structure beneath, will also be on view.

These colorful steel and Plexiglas sculptures will be displayed alongside equally colorful brush, ink, and paint works on newsprint. In these little known works on paper, black outlines of figures are filled in with blocks of color like stained-glass windows. Despite having been created more than 50 years apart, the formal and conceptual link between the colored works on paper from the 1950s and the recent Plexiglas sculptures is undeniable.

In his catalogue essay for the exhibition, Bryant recounts visiting Caro’s studio in 2010 and studying the colored works on paper together. Caro, not having seen the works in years, was taken aback by his own early, and previously forgotten, drawings, and immediately remarked that he would use them as inspiration going forward. He began work on the Plexiglas series the following year.

A similar dialogue between Caro’s works on paper and sculptures is examined at Mitchell-Innes & Nash’s Madison Ave gallery, with a focus on line. A selection of black-and-white drawings featuring expressionistically painted images of bulls and men, which were exhibited in Caro’s retrospectives at the Museo Correr, Venice (2013) and the Yale Center for British Art, New Haven (2012), highlight the linear qualities of the steel, bronze and brass sculptures on view.

Ms. Mitchell-Innes first met Caro as a student when she worked in his studio in the 1970s and maintained a life-long relationship with him up until his death in 2013. The gallery’s first exhibition with the artist, in 2002, featured the Barbarians series, consisting of 6 large-scale sculptures of riders on horseback made from wood, steel and vaulting horses. She last visited him the week before his death when he was concluding the current body of Plexiglas work. 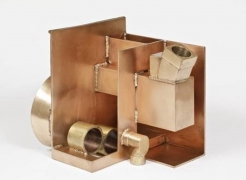 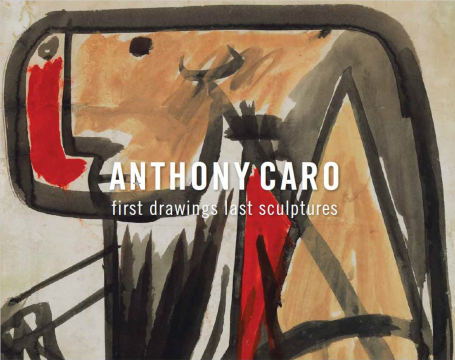 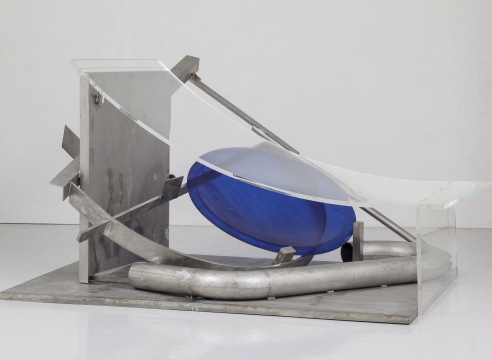 English artist Anthony Caro left an enormous legacy when he died in 2013 at age eighty-nine. He was celebrated for his sculpture in Britain by the late 1950s, and internatinoally beginning in the early '60s. 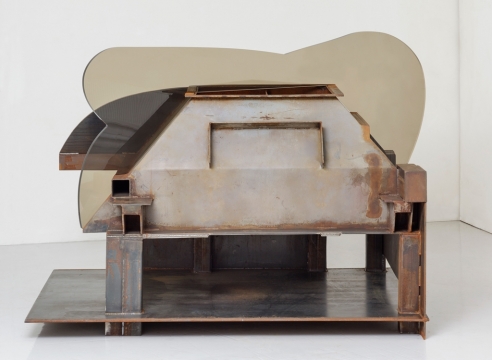 There is an unmistakable ashes-to-ashes, dust-to-dust, circle-of-life quality, an equally youthful then mature balance of roughness and polish that only occurs at either end of life.
Another saying that comes to mind is, live by the sword, die by the sword. An old friend once told me, “You better hope what you did as a kid was good, because you always go back to it.” 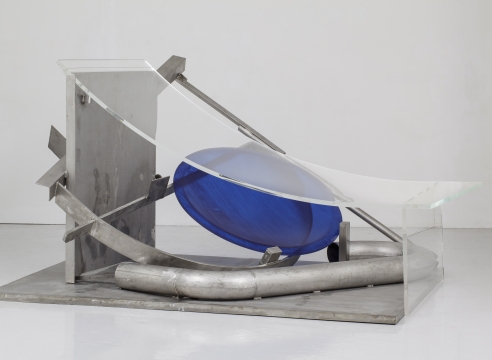 By Roberta Smith
What to See in New York Art Galleries This Week
The New York Times February 2, 2017

In the excellent exhibition “Anthony Caro: First Drawings Last Sculptures,” which occupies both Mitchell-Innes & Nash locations, the pieces do a little of everything while adding something new: thick slabs of tinted or clear Perspex (acrylic sheets). The sculptures in Chelsea are especially powerful in scale and size. But as you walk around them, viewing their structures from different sides, noting the collusions of metal and plastic, human perception seems scrupulously accounted for. 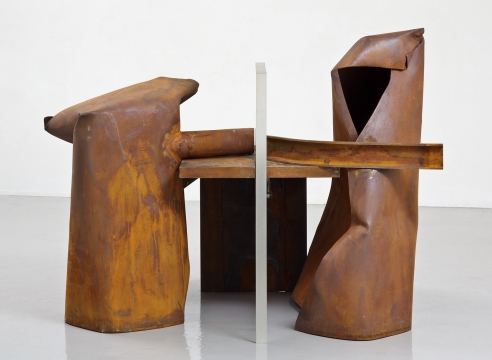 In the early years of his career, Anthony Caro worked on a series of twisting, enigmatic depictions of human and animal figures, works that owed much to the spatial interrogations of Picasso and the broader canon of 20th Century European abstraction.  The works are impressive in their understanding of the gestural and conceptual operations of the era’s avant-garde, but for Caro’s career, served in part as a starting point for his own engagement with space, not only on paper or canvas, but in three dimensions. 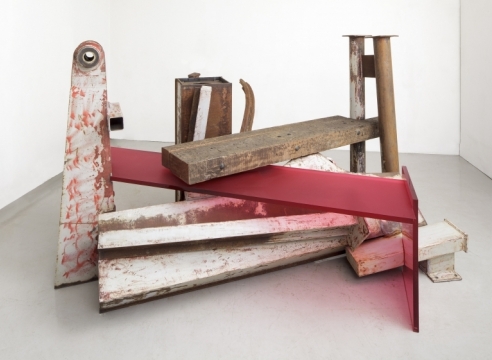 Once a cartoonish vibe takes hold of the works, the weighty hunks of steel in them start seeming faintly comic as well. Some of Caro’s steel consists of repurposed found objects: a hopper used to cart sand; a chunk from some kind of gantry. Rather than being elevated from their humble origins thanks to Caro’s high art, these objects now seem to keep Caro’s art down-to-earth – almost like found anchors that keep his foofy acrylic from blowing away. 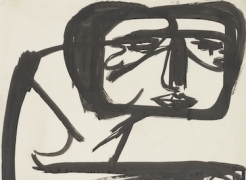 With an Anthony Caro show currently on view at Mitchell-Innes & Nash gallery in New York, we turn back through the ARTnews archives. Because the show brings together very early and very late work from the British artist’s career, we have selected one old excerpt, by Lawrence Alloway, and one new sample, by William Feaver, who in 2014 wrote an essay following Caro’s death the year before. 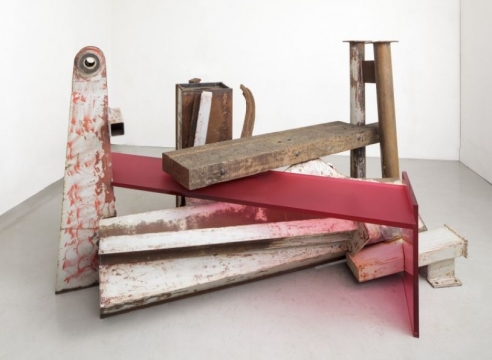 This is the artist’s first exhibition in the US since his death in 2013 and his sixth with Mitchell-Innes & Nash, who has exclusively represented Caro in New York for 14 years. The exhibition features work spanning Caro’s 60-year career and highlights the artist’s fearless and constant innovation throughout his lifetime. 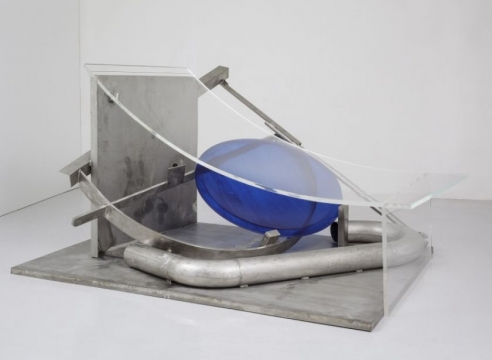 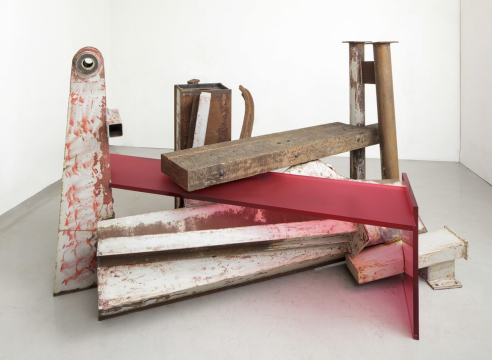 By Casey Lesser
20 New York Shows to See over the Holidays
Artsy December 16, 2016

For the first U.S. exhibitions of Caro’s work since his death in 2013, the gallery mounts two concurrent shows, at its Chelsea and Upper East Side locations, featuring works that bookend the great sculptor’s innovative, 60-year career. 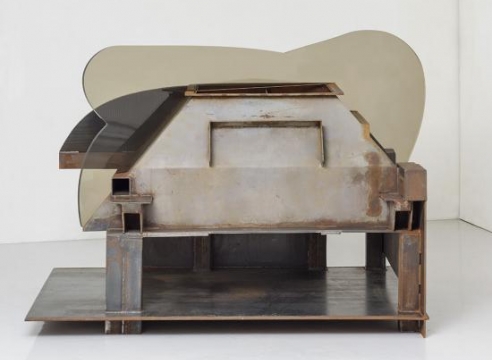 By William S. Smith
THE LOOKOUT
Art in America December 2016