Study for the Firewall (Phoenix with a P)

Mitchell-Innes & Nash is pleased to present General Idea: P is for Poodle, an exhibition of works by General Idea (1969-1994) focusing on one of the central motifs in the artist group’s oeuvre: the poodle. Originally scheduled to open in April 2020, this show was postponed due to the COVID-19 health crisis. With the re-opening of New York, P is for Poodle is now open to visitors by appointment only. Please see below to schedule a time to visit.

This exhibition brings together two major installations dating from the early- to mid-1980s. Previously exhibited at the Musée d’art moderne de la Ville de Paris as part of General Idea’s retrospective in 2012, these works will be on view in the United States for the first time, along with a selection of paintings, drawings and sculptural wall works. A fully illustrated catalogue will accompany this exhibition, which is available to purchase online.

Founded in Toronto in 1969 by AA Bronson, Felix Partz and Jorge Zontal, General Idea were among the first artists to implement media critique and queer theory in their work. For twenty-five years, they created a pioneering and singular practice that addressed the intersection of art and commerce, the role of the artist and the museum, body politics and, later, the AIDS crisis. Using strategies of appropriation, audience participation, humor and irony, they staged performances and created paintings, posters, photographs, installations, videos, magazines and other multiples that together form a kind of meta-spectacle as much as a formal artistic oeuvre. As Bronson has noted, General Idea “emerged in the aftermath of the Paris riots, from the detritus of hippie communes, underground newspapers, radical education, Happenings, love-ins, Marshall McLuhan and the International Situationists….[It] was at once complicit in and critical of the mechanisms and strategies that join art and commerce, a sort of mole in the art world.”

Known for “its wit, pampered presence and ornamental physique,” the poodle arrived into the visual lexicon of General Idea in the early 1980s and quickly became a vehicle by which the group addressed issues ranging from sexual stereotypes to the commodification of contemporary art. However, beyond its use as an agent of subtle yet substantive political and social critique, the poodle also served as a kind of heraldic device—an emblem for the mythology of General Idea and its processes of mythmaking. Through its various incarnations of the poodle, General Idea strived for a metanarrative that skirted the boundaries between artifact and artifice; history and fantasy; truth and fiction.

The large-scale installation P is for Poodle (The Milky Way from the 1984 Miss General Idea Pavillion) (1982-1983) features three poodle mannequins within a dramatically lit stable of bedded hay. The work recalls the familiar mise-en-scene of the nativity—the archetypal family unit. Each of the poodles is surrounded by a golden curlicue, suggesting both divine intervention and urination, while a backlit aluminum panel in the background depicts the Canis Major constellation, which appears within the Milky Way. Gilded milking stools, brass buckets and a soundtrack of chanting, drums and audience applause add to the mystery and mysticism.

Firewall (1985), the second major installation, further draws attention to the mechanics of display. Presented as a recovered wall fragment from the so-called ruins of the 1984 Miss General Idea Pavillion—an elaborate but unrealized structure that was, according to a myth promulgated by the artist group, destroyed in a fire, it measures more than eighteen feet long and includes over 200 poodle-embellished plaster bricks painted in yellow and orange hues suggestive of the volcanic fires of Pompeii. Among the plaster tiles, a painting displays three poodles bouncing over an inferno, their curlicues now seemingly pulling them towards the flames, evoking pre-Christian pagan rituals. Embedded baby faces and skulls on its frame are repeated alongside the top and bottom of the wall, referencing Renaissance putto and vanitas—love and death.

Plans for the original exhibition included Mondo Cane Kama Sutra (1984), a cycle of ten large paintings that each depicts three distinctly colored, stylized poodles against a black background, combined and recombined in various sexually suggestive positions. Unfortunately, this work will not be on view at the gallery but we have, in its place, two of the Distressed versions of Mono Cane Kama Sutra on display. Like their antecedent, the poodles in these paintings—with their round bodies, fluorescent colors and systematic permutations—were formal references to the stylized abstractions of Frank Stella’s Protractor series from the late 1960s. However, unlike the original cycle of ten panels, these smaller distressed paintings were treated to look like pseudo-historic materials or archaeological finds. As Felix Partz once noted, they were “trying to create a work that is perfect for the museum/gallery context, something that requires conservation and delicate handling.” 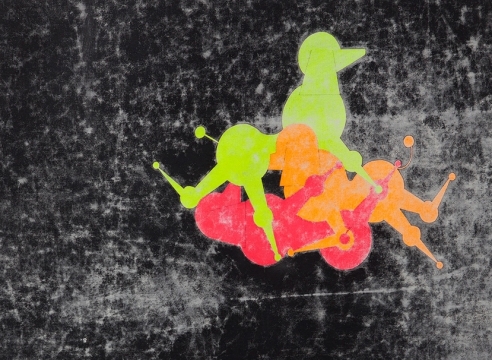