Mitchell-Innes & Nash Katherine Bernhardt, Alfred Jensen, Chris Johanson, Chris Martin, Andrew Masullo and Judith Scott June 30 – August 5 New York - Mitchell-Innes & Nash is pleased to announce a summer group exhibition of painting and sculpture featuring work by Katherine Bernhardt, Alfred Jensen, Chris Johanson, Chris Martin, Andrew Masullo and Judith Scott. A review of Alfred Jensen’s 1979 retrospective at the Albright Knox Art Gallery posited that “Jensen’s work is always ‘about’ something, referential, but it’s also extremely personal in the way the subject is handled.”1 The same could be said of the other artists in the exhibition: with hand-wrought qualities and an aggressively direct use of color, texture, and material, their work provokes cultural and psychological readings as well as aesthetic ones. These artists have been said to work impulsively or intuitively, which is not to detract from the formal power of their work. They suggest and supersede a number of dichotomies: abstraction and representation, skilled and unskilled, polished and crude, innocent and knowing. In paintings and sculptures both self-contained and far-reaching, they hint at systems, structures, or lived experience while letting materiality take the fore. Alfred Jensen’s work often took the form of grids with numbered or colored shapes. The abstract geometrical shapes of his paintings refer to philosophical or numeric systems: from Arabic, Chinese, and other ancient counting systems, to symbols from the I-Ching and Mayan calendars. Chris Johanson’s vivid, abstract paintings on scavenged wood hint at the artist’s deep engagement with issues of environmentalism, pacifism, and anti-materialism. Katherine Bernhardt’s large-scale paintings based on Moroccan rugs take intricate patterns as a starting point for her loose, gestural brushwork. The work is evocative of its source while avoiding a mimetic relationship to it. Judith Scott’s textile-based sculptures, created from wrapping a variety of objects in yarn and string, call to mind forms like totems, cocoons, or human limbs. Their richly textured surfaces allude to an unknowable interior life. In Andrew Masullo’s small-scale paintings, brightly-colored shapes and varied surfaces evoke objects and signs from modern life while remaining elusive. Chris Martin’s painterly vocabulary is vast and heterogeneous in both style and source. His use of unorthodox materials reveals an eye trained on formal idiosyncrasy and alive to visual possibility. Katherine Bernhardt lives and works and New York and is represented by Canada. Alfred Jensen was born in 1903 in Guatemala and died in New Jersey in 1981. His Estate is represented by the Pace Gallery, New York. Chris Johanson lives and works in Portland, Oregon and Los Angeles. He is represented in New York by Mitchell-Innes & Nash. Chris Martin lives and works in Brooklyn, New York and is represented by Mitchell- Innes & Nash. Andrew Masullo lives and works in San Francisco and is represented in New York by Feature, Inc. Judith Scott was born in Ohio in 1943 and died in 2005. The gallery is indebted to Ricco Maresca Gallery and Creative Growth Art Center in Oakland, CA, for their support of this exhibition. For further information please email: Nicole@miandn.com Upcoming exhibitions: September | Paul Winstanley October | Sarah Braman 1 All The Beautiful Systems: Alfred Jensen, Peter Perrin, artscanada May/June 1979 pp 40-49 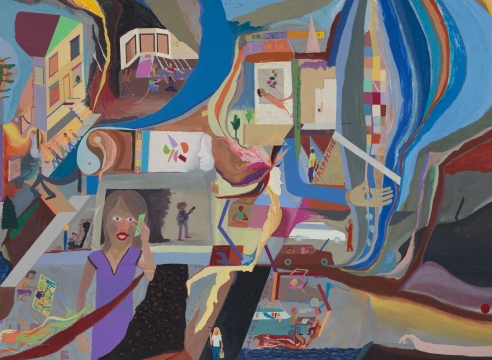