Pope.L in conversation with Stuart Comer and Christophe Cherix on the occation of Pope.L: Proto-Skin Set at Mitchell-Innes & Nash, NY, 2017.

Mitchell-Innes & Nash is pleased to present Proto-Skin Set, an exhibition of early work by Pope.L from 1979 to 1994 that explores the use of materiality and language in his practice. On view for the first time is the artist’s Proto-Skin Sets, a selection of mixed media collages and assemblages that deal with the social constructions of language, race, and gender. The exhibition also includes a five-part document from 1979 that is part of an open-ended set of written works titled Communications Devices. This is Pope.L’s fourth exhibition with the gallery and is accompanied by a catalogue with a Q&A between Pope.L and Bennett Simpson, Senior Curator at Museum of Contemporary Art, Los Angeles.

Pope.L began making Proto-Skin Sets and Communication Devices in the 1970s and 1980s while he was a student at Montclair State University in New Jersey and continued working with them throughout his teaching tenure at Bates College in Maine. Using language and writing as a starting point, these works anticipate his ongoing project “Skin Sets,” text-based works that employ language to construct pointed, absurd, and layered messages about the vagaries of color.

The Proto-Skin Sets use found materials like local newspapers, commercial poster boards, and billboard advertisements as a point of departure to examine the possibilities of language. Pope.L interpolates the methods and uses of writing, both visually and literarily. Seeing language as image and image as language, Pope.L uses texture and mark-making to make these definitions concrete. He incorporates organic materials to speak about duration—for example peanut butter, semen, and human hair—in several of the works, something he has done subsequently throughout his practice.

Pope.L began creating Communications Devices in 1976 when he was navigating how to write language and text within his practice. Communications Devices are a wide-ranging enterprise composed primarily of written things—in the form of stories, novels, plays, song lyrics, documentation, and more—and is part of the larger Proto-Skin Sets series. Some of the stories in the Communications Devices set, for example, were published as fiction in small literary presses while others were kept in an accounting ledger (now lost) along with the majority of the oeuvre. The Communications Device on view at Mitchell-Innes & Nash is a project from the 1970s. For this project, Pope.L gathered gallery show postcards intended to promote contemporary exhibitions in SoHo, wrote on them, and mailed them out to galleries of which he was aware. In addition, he created an enlarged version of the same text, typing it out on 250 copies of standard photocopy paper before leaving small stacks in the same galleries. The total number of postcards or which particular ones were mailed for this four-part work is unknown. While a variety of postcards was originally mailed, the only one that remains is in photocopy form and advertises a group show at The Clocktower. 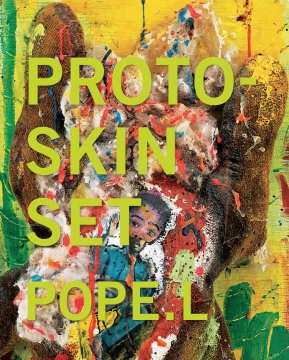 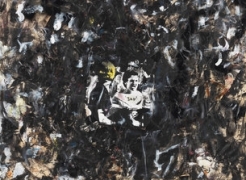 The esteemed multidisciplinary artist Pope.L is having a moment. His contribution to Documenta 14, the prestigious international exhibition in Kassel, Germany — and this year also in Athens — is the slyly subversive “Whispering Campaign,” featuring performers who walk the streets of both cities, confiding in strangers the artist’s elliptical yet biting aphorisms about race and color from his word- based “Skin Set” drawings. Last month, Pope.L’s “Claim (Whitney Version),” a beautiful vexing installation featuring an enormous pastel-colored room festooned with slices of baloney, received the Bucksbaum Award as a “boundary-breaking” work in the recent Whitney Biennial. 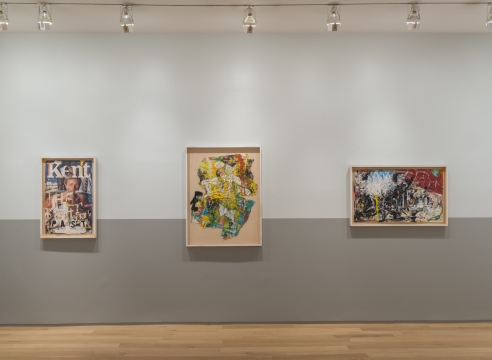 Press
Goings On About Town
The New Yorker June 2017

The conceptual artist, who was recently awarded the Bucksbaum Prize for his piece in the Whitney Biennial, is best known for confrontationally absurdist public performances. But this show of early work highlights his gift for combining text, found imagery, and evocative materials. In some of his assemblages, smeared peanut butter, like impasto pigment, frames magazine clippings, such as one that reads “Now You Can Bring Black History Home” and features a photo of African-American schoolchildren reciting the Pledge of Allegiance. In the sardonic, Rauschenbergian “Crawling to Richard Pryor’s House,” from 1994, a froglike, brown stuffed animal, sandwiched by paint and wood glue on a board, also bears a fragmentary, appropriated image of a child. Pope.L has a knack for drawing out the scatological qualities of gestural painting, the abject potential of collage, and the rhetorical power of color to expose the psychosexual substrate of American racism. 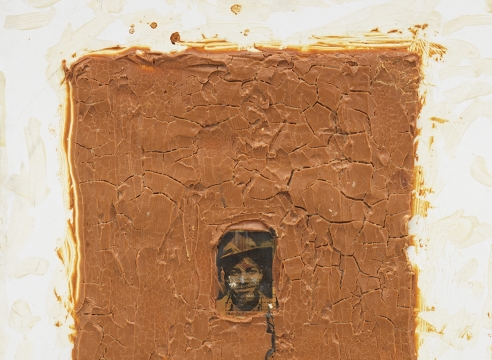 By Paul Laster
William Pope.L weighs in on art and social change
Time Out New York May 23, 2017

Best known for absurdist public performances, Pope.L has a history of dealing with the politics of race and identity—which the African-American artist doesn’t limit to black versus white: His installation at the 2017 Whitney Biennial, for instance, consists of a four-sided structure covered with rows of rotting bologna slices meant to represent the percentage of Jews in New York City. With a solo show opening in midtown, Pope.L talks about his fascination with the relationship between words and pictures, his fondness for quirky materials and the importance of truth in his art. 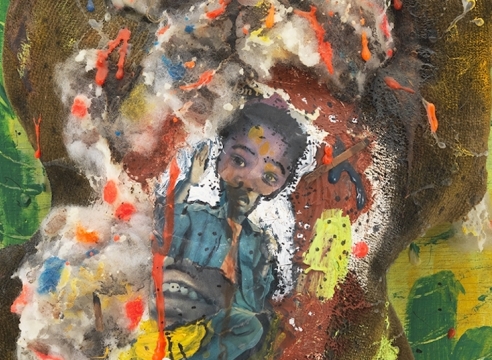 by The Editors of ARTnews
9 Art Events to Attend in New York City this Week
ARTNEWS May 22, 2017

On view at Mitchell- Innes & Nash will be Pope.L’s “Proto- Skin Sets,” made between 1979 and 1994 and never before publicly exhibited. Combining text and odd materials like semen, peanut butter, and hair, these works reflect on black history and how identity gets constructed. Also in this exhibition will be “Communications Devices,” a set of works form the 1970s in which Pope.L wrote on postcards from SoHo gallery shows, copied these promotional materials, and then left stacks of them in galleries. 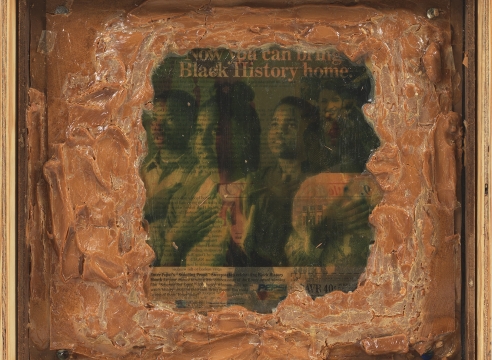 A friend and I recently had a conversation about the trend of galleries putting together shows of famous artist’s lesser-known works from yesteryear and writing a vague exhibition text to explain why they’re important. Here, that means “an exhibition of early work by Pope.L dating from 1979-1994 that demonstrates the function of materiality and language in his practice.”

While that sentence doesn’t really say anything, we’re guessing this show will be good because Pope.L is a genius and the racial politics he’s addressed in his work since 1979 are sadly still all-too-relevant today. We’re guessing “the function of materiality and language” will always be “relevant” until we’re all telepathically linked by some Elon Musk gadget. 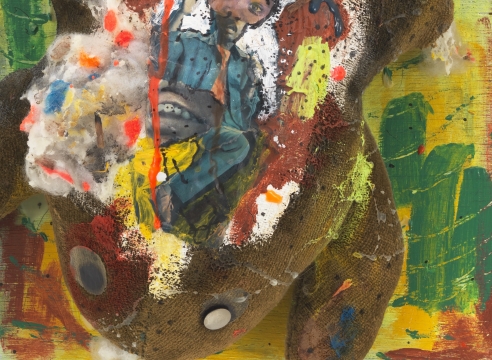 Generally made with pen and ink on graph paper, Pope.L’s Skin Set works from the late 1990s and into the 2010s offer sharp, sometimes witty critiques of the absurdity of racial stereotypes and references to skin color (i.e “Black People are the Window and the Breaking of the Window,” “Blue People Cannot Conceive of Themselves,” “White People Are Angles on Fire”). This exhibition of early works executed on local newspapers, billboards, and advertisements anticipates the artist’s Skin Set works. In a series of works dating from 1979-1994, Pope.L explores issues including race and masculinity and the function of language and materiality in his practice. The artist is also currently presenting work in the Whitney Biennial.