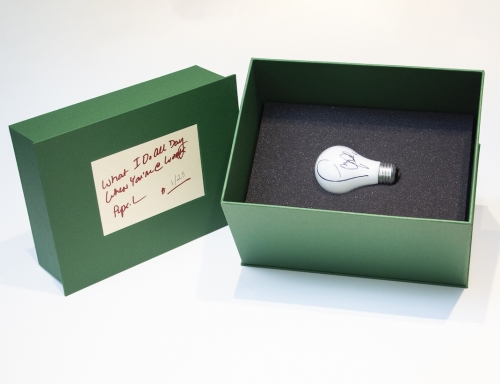 Pope.L is an internationally acclaimed interdisciplinary artist, perhaps best known for his provocative performances and interventions in public spaces. His work addresses issues and themes of language, gender, race, social struggle, and community. He has received many prestigious grants and awards, including the Guggenheim Fellowship, NEA fellowships, and the USA Fellowship in Visual Arts. He has been included in numerous exhibitions around the world, and in fall 2019 the Whitney Museum and MoMA host simultaneous solo exhibitions, and the Public Art Fund presents a major performance. Pope.L’s sculpture Lever (2016) was included in the group exhibition Mechanisms at the Wattis in 2017.

1.
Pope.L addresses the most significant issues of our time, but that does not mean his work is without humor. This edition consists of a light bulb signed by the artist and nestled in a beautiful handmade box that would typically house an object of great worth. A light bulb is the symbol of a brilliant idea, and here Pope.L is poking fun at the cliché of the artistic genius. The light bulb is exhausted, and thus no longer has any practical value, but the idea itself, endorsed by a renowned artist through his signature and enshrined in a sumptuous container, is nevertheless fetishized. The work seems to imply that in American consumer culture, anything can be packaged and sold.


2.
Exhaustion is just another word for being tired...

There is a John Prine song called 'Angel from Montgomery‎' (1971). In many ways, the song is about just being tired… I wish I'd channeled it to make this edition but...

However, if I had, if I had, I would have been thinking: time, time passing, time wasting—a woman, maybe a man, you know a woman-man, you know what I'm saying—anyway she's standing at the window like it’s a parapet, a light bulb dangles from the ceiling, she's leaning out the window and it feels like she'll lean that way forever—that's the sort of situation I'd have been channeling...